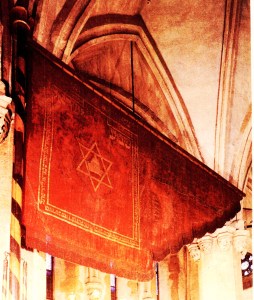 Jewish flag of Prague, one of the oldest uses of the so called “Star of David” as token of a Jewish community in Europe, what later became the badge of the Zionist movement as well as for Jews in general. The origin however probably refers to the last ancient Jewish ruler in Israel: Simon Kosiva, better known as Bar Kokhba, lit. “the star”.